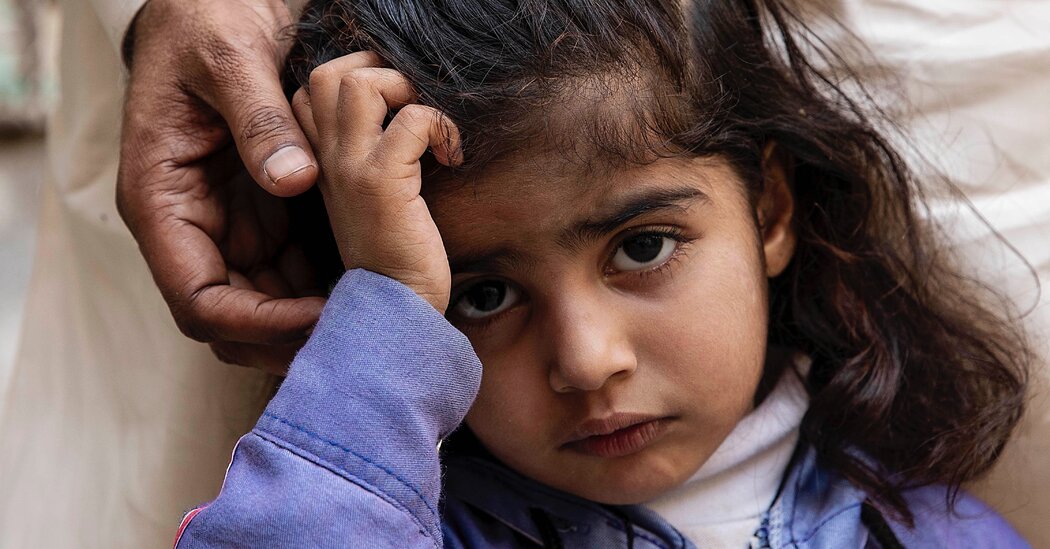 At a government hospital in Larkana, I watched as a nurse left a needle uncapped after preparing medication in the pediatric unit. Then she tossed it, tip still exposed, into a regular wastebasket. I didn’t see any sharps containers. Outside, I asked a cleaner how the hospital deals with trash. He walked me past the hospital’s front gate and showed me the garbage lined up around its perimeter. There were exposed needles, IV cannulas and dirty nebulizer masks everywhere. An incinerator was nearby, but it wasn’t in use. (The W.H.O. has since donated new incinerators, but the pandemic delayed their installation.)

As an emergency-room doctor, I have provided medical care overseas in all sorts of ghastly environments. Still, I was shocked here. Even in impoverished, war-drained countries in sub-Saharan Africa, I was kept to the strictest of infection-control standards as a medical student. Nurses in the operating and labor and delivery rooms had eyes in the back of their heads, ready to admonish anyone who broke protocol. In an H.I.V. ward in South Africa, I was startled by the lacerating words of a fellow student, a local woman, as I clumsily handled a needle. She warned me that no matter how rushed I was, this task can’t be compromised. It’s the first lesson we learn here as students, she explained.

Syringes with built-in safety closures that easily slide forward to cover the needle are common in American health facilities, but even at Aga Khan, these aren’t available. At best, the plunger gets locked, so the syringe can’t be reused. When I went to several pharmacies, where these needles are dispensed, and asked about proper disposal, I got awful advice. One pharmacist bent the needle to 120 degrees. “This is what we do,” he told me. The sharp tip was still exposed, obviously. “In the sewer, in the street,” another pharmacist said when I asked him where to discard the needle, before tossing it out the window without looking. I watched the needle float in a puddle of open sewage. Around the corner, children skipped down the street.

At the time, Rajesh Panjwani was the Sindh HealthCare Commission’s deputy director of inspection for the Larkana area, which includes Ratodero. I managed to see him. He shared an office with Faraz Hussain, an administrator; their desks were at right angles to each other. “All the hospitals are using the safety boxes,” Panjwani assured me, referring to sharps bins. I told him that was not what I saw, but he disputed my characterization. We went back and forth until he had to take a phone call. I didn’t even know Hussain was listening, as he was typing briskly on a large desktop computer, but now he spoke up. “You are telling 100 percent truth about the government hospitals,” he said to me.

Later, Panjwani told me that he had inspected many clinics in the area and that they had safety boxes available. I said I hadn’t seen a safety box in any of the dozen or so clinics I visited. At this point, Hussain said something to Panjwani, and they began to argue in Sindhi. My translator quietly said to me, “Hussain is saying: ‘She’s telling the truth. Please admit the truth. There’s no safety boxes at the clinics.’”

Everything, it seems, is always someone else’s job. Aftab Ahmad, a doctor who was in charge of monitoring and evaluation at the Sindh AIDS Control Program, blamed the district health office for the outbreak. “There is some denial, you are right,” Ahmad said. “People are not completely doing what they ought to do.” As for the Sindh HealthCare Commission, while it can order a clinic to be sealed, it looks to the police to enforce the order. The commission considers its job done when it has made its recommendation to close clinics with violations; the commission doesn’t consider itself responsible for actually shutting the facilities down or making sure they stay closed.

The cruel dilemma, though, is that without these private health spaces, many people in Ratodero and other remote areas in Pakistan wouldn’t have access to any health care. For the poor and uneducated, the choice is usually between terrible care or no care at all.

Return to Work? Not With Child Care Still in Limbo, Some Parents Say. 6 min read

Return to Work? Not With Child Care Still in Limbo, Some Parents Say.

Heart Problems After Vaccination in U.S. Are Uncommon and Short-Lived, Researchers Say

Abebech Gobena, the ‘Mother Teresa’ of Africa, Dies at 85

The Making of an Olympian 2 min read

The Making of an Olympian

Fortune is dropping its latest cover as NFTs 1 min read