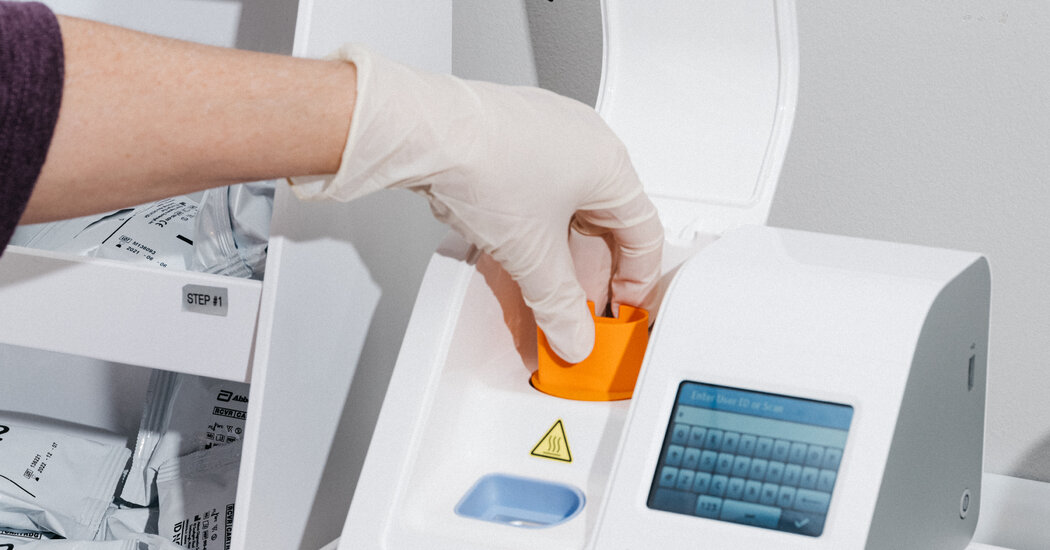 Dr. Robin Larabee was thrilled to start offering coronavirus testing at her pediatrics practice in Denver last fall. Testing for children is often scarce, and her new machines could return results within minutes.

She quickly discovered an unexpected obstacle: a major health insurer that paid her less than the cost of the test itself. Each kit Dr. Larabee purchased for her machines cost about $41, but the insurer sent back half that amount each time she submitted a claim.

Across the country, some doctors are seeing reimbursement rates so low that they do not cover the cost of the test supplies, jeopardizing access to a tool experts see as crucial to stopping the virus’s spread. “I’ve gone up the food chain, and gotten as far as I can, and they just tell me this is the rate,” she said.

She doesn’t use her new machines for that health plan’s enrollees anymore, instead sending their tests to an outside laboratory. That extra step means results take days rather than minutes to come back.

“All I did this summer was look at spreadsheets to figure out how much this would cost,” she said. “In 15 years of practice, this is the first time I’ve ever had to consider altering my care for a certain population.”

With new variants of coronavirus emerging, experts say testing will be crucial to containing the pandemic’s spread. But the low fees have led some doctors to stop testing certain patients, or forgo testing altogether. The problem of low reimbursement rates appears to be most common with pediatricians using in-office rapid testing.

“We are not doing Covid testing because we cannot afford to take the financial hit in the middle of the pandemic,” said Dr. Suzanne Berman, a pediatrician in Crossville, Tenn. Her clinic serves a low-income Appalachian community where coronavirus is now spreading rapidly, and 17 percent of tests are coming back positive as of this week.

Rapid in-office tests are less sensitive than those sent off to a lab, which means they miss some positive cases. Researchers are still learning about the efficacy of these tests in children. Still, infectious disease experts say fast turnaround tests are important in controlling the pandemic, particularly in areas where other types of testing are less available.

“We definitely need to have these tests covered,” said Sam Dominguez, medical director of the microbiology lab at Children’s Hospital Colorado. “If they come up positive, you have an answer right away and can go ahead and do the appropriate isolation.”

Across the country, multiple doctors identified UnitedHealthcare and certain state Medicaid plans as the ones that routinely pay test rates that do not cover the cost of supplies.

Medicaid and Medicare often pay lower prices than private insurers do. But the reimbursements from a large private insurer like UnitedHealthcare came as a shock to doctors.

A spokesman, Matthew Wiggin, said that UnitedHealthcare was not underpaying for coronavirus testing, and that its rates were consistent with those of other health plans.

“We want to make sure every member has access to testing and encourage any provider with payment questions to contact us so we can resolve their concerns,” he said in a statement.

Doctors who have complained to UnitedHealthcare and other health plans, however, say they’ve been offered little recourse. One was told it wasn’t an issue that any other doctor had raised. Another was directed to find a supplier with a lower price.

Many private insurers have prospered during the pandemic, with Americans delaying much medical care in 2020. As of September, insurers’ monthly profit margins on large-group health plans were up 24 percent.

This month, Minnesota-based UnitedHealthcare reported earning a $15.4 billion profit last year, up from $13.8 billion in 2019. In its 2020 financial review, it projected that costs of coronavirus testing would have an “unfavorable” impact on this year’s share price.

In mid-January, the American Academy of Pediatrics informed UnitedHealthcare of the problem its members have faced. It’s still awaiting a response. The California Medical Association has also raised the issue.

With other health services, doctors usually have a way to recoup losses when they believe insurer payments are not high enough: They can bill the patient directly for the remaining balance.

But when it comes to coronavirus testing, federal law prohibits that. Legislation passed last spring tried to make coronavirus testing free for patients by barring providers from billing patients for the test. It requires insurers to fully cover the cost of the test but does not define what constitutes a “complete” reimbursement.

Pediatricians provide much of the testing infrastructure for American children. Many large testing sites run by health departments and pharmacies do not test children, even though demand for pediatric testing is expected to rise as more students return to in-person school.

He began offering rapid coronavirus testing in October, buying each kit for $37, but learned the plans covering his Medicaid patients paid only $15 to $19.

He did a bit of digging: Texas farms out its Medicaid program to private insurers known as managed care organizations. For nearly all of last year, the state did not set reimbursement rates for in-office testing. Instead, it let private insurers decide what they wished to pay.

At the end of December, Dr. Stephens decided to stop offering the rapid test to Medicaid patients and to provide it only to those with private insurers, whose plans typically paid $45 to $50.

“It’s difficult for me ethically, because I like to treat everyone the same,” he said. “I have a problem having to not offer things to people when, in my medical judgment, they’re deserved.”

Aetna runs one of the Medicaid plans that serve Dr. Stephens’s patients. A spokesman confirmed that it had paid doctors $15 for coronavirus tests last year, but said it was increasing its fee to $37.79 after receiving updated guidance from the state in recent weeks.

Providers elsewhere are using up the tests they have already purchased, regardless of a patient’s insurance, taking some losses.

“I feel torn between my obligation and my desire to have patients see me, and my ability to stay in business,” said Dr. Reshma Chugani, a pediatrician in the Atlanta area. She has found that most insurers fully cover the test, but UnitedHealthcare — the insurer for about a quarter of her patients — typically reimburses 60 percent.

Her practice sustained a 20 percent loss last year and still has low patient volume. Some parents have put off wellness checks, and fewer children in school means fewer sick visits. She has furloughed some staff members and asked others to work reduced hours because of the decreased revenue.

“It feels like a lose-lose situation,” she said. “I could say no to testing, and drive my patients away. Or I can say yes, and keep operating at a loss.”

This Drug Gets You High, and Is Legal (Maybe) Across the Country 5 min read

‘SNL’: Nick Jonas Gets Raunchy In Musical Sketch About Getting Aroused at a Bachelor Party — Watch!

‘SNL’: Nick Jonas Gets Raunchy In Musical Sketch About Getting Aroused at a Bachelor Party — Watch!