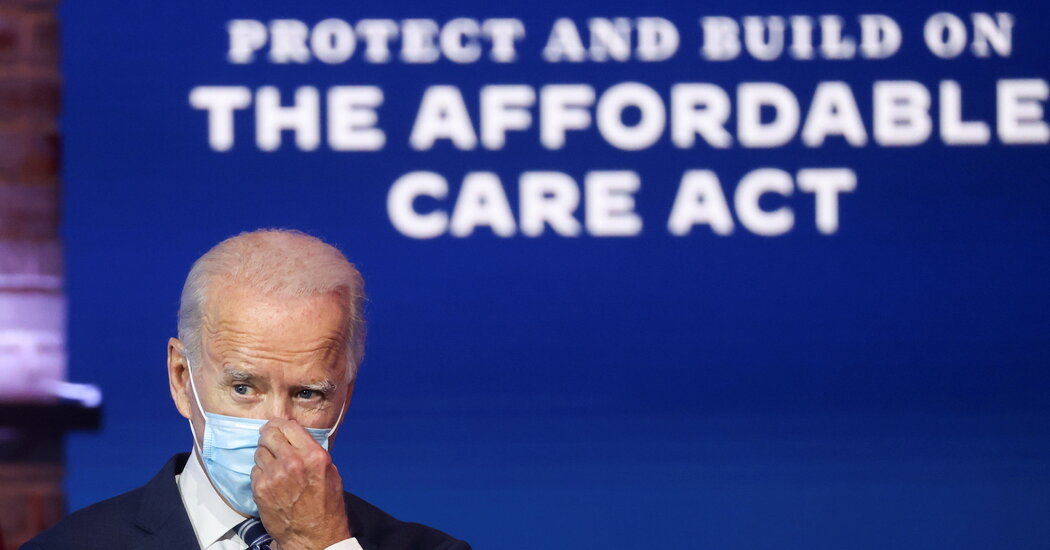 In December, the last Obamacare enrollment period under the Trump administration closed. Now that the Biden administration has arrived, it’s trying a do-over.

The renewed effort reflects the Biden team’s view that the Trump administration did too little to help people find coverage, despite a public health crisis and waves of job losses. Although insurance sign-ups were up a bit compared with last year, the growth did not match the increase in need.

In an executive order scheduled to be signed Thursday, President Biden called for a new 90-day enrollment period on Healthcare.gov, the insurance marketplace that serves 36 states. The White House plans to run an outreach campaign with paid advertising and direct-to-consumer marketing.

The 14 states that manage their own marketplaces are likely to follow suit, nationalizing the effort.

“There’s no question that this is a better-late-than-never situation for this open enrollment,” said Eliot Fishman, a senior director for health policy at the consumer group Families USA, who served in the Biden transition but did not work on this policy.

Around 15 million Americans lack insurance and would be eligible for marketplace coverage, according to a recent report from the Kaiser Family Foundation. Four million of them would qualify for a plan with no-cost premiums.

“The four million people who could be getting free coverage who are instead uninsured — that, to me, is just screaming out for outreach,” said Cynthia Cox, a vice president at the foundation and a co-author on the report.

Many people advising the Biden administration emphasize that Obamacare will work better as a safety net if more people understand it exists. Unlike self-employed people who have signed up for Obamacare plans for years, many of the Americans losing their insurance now have never used the marketplaces or Medicaid. They may need advertising to tell them about the opportunity, as well as professional help to select a plan.

Ms. Cox said the marketing needs to emphasize not just that sign-ups are possible, but also that people can get financial help buying insurance — and why insurance is worth having. In 2017, the Trump administration cut the program’s advertising budget by 90 percent.

But increasing all the services that help connect people with coverage may take time. Biden administration officials may find themselves hamstrung by the lack of pre-existing networks of outreach workers. State officials say such networks were crucial to getting the word out during their extra sign-up periods.

The Affordable Care Act already allows people who lose jobs or experience a change in income to sign up for coverage outside of the regular fall open enrollment period. What the Biden administration will do is open the marketplaces to all Americans, without requiring them to provide paperwork proving their eligibility.

Evidence from states that tried something similar last spring suggests that the extra enrollment time could be an effective way to bring coverage to hard-to-reach populations: younger Americans, and those who have remained uninsured despite the health law’s coverage expansion.

“It wasn’t a deluge of people, but we were pleased with the type of people we were drawing in,” said Audrey Gasteier, chief of policy and strategy at the Massachusetts Health Connector. It ran a special enrollment period for nearly five months last year, and had 22,800 sign-ups as a result.

Usually, about a quarter of the Connector’s enrollees are between 18 and 34. But that figure was 40 percent for those who signed up during the special enrollment period, suggesting that the pandemic may have nudged so-called Young Invincibles to decide health insurance was worth the cost.

“The value of health insurance skyrocketed for a lot of Americans,” said Michael Marchand, chief marketing officer for the Washington Health Benefit Exchange. “All of a sudden masks, Clorox wipes and health insurance became really important.”

Washington also had a higher than usual rate of younger people among the 7,000 who took advantage of that state’s extra enrollment period last spring.

Health insurers tend to oppose expanding enrollment opportunities: Limiting sign-ups to once a year is seen as an incentive for people to carry coverage all the time instead of waiting until they get sick to sign up, which can increase premiums. But conditions during the pandemic are different enough that the major health insurance lobbies favor a new enrollment period this time.

States that reopened their marketplaces did so with significant outreach campaigns. Washington and Massachusetts used the state agency that manages unemployment benefits to notify the newly jobless that they might qualify for health insurance benefits through the marketplace. California doubled its usual marketing budget last year.

They also tapped navigators and enrollment assisters, who could get the word out that the sign-up period remained open — often doing so over Zoom webinars rather than in-person events.

But the Biden administration has to deal with Trump-era cuts to Obamacare advertising and to in-person outreach. Last year, for example, South Carolina and Utah received no federal funding for the health law’s assistance-focused “navigator” program.

“If you don’t have that infrastructure there to start with, building it will eat up a lot of the time on the clock,” said Kevin Patterson, chief executive of Connect for Health Colorado, the state’s insurance marketplace. “It’s going to be harder.”

Lack of information about Obamacare is not the only reason that millions are uninsured. Millions of poor Americans in the 12 states that have not expanded their Medicaid programs can’t get any financial help buying their own insurance.

Experts from the right and the left also argue that the high cost of health insurance and the deductibles people must pay even after getting covered discourage many middle-class Americans from buying health plans. Improving the affordability of health coverage, however, is hard to accomplish through executive action.

As part of his latest coronavirus relief proposal, Mr. Biden has recommended legislation that would increase the generosity and breadth of tax credits that help people buy their own insurance. But any changes to those subsidies will require action by Congress.

Operating Rooms Go Under the Knife

Why Exercise Can Be So Draining for People With Rheumatoid Arthritis

Biden Shifts Vaccination Strategy in Drive to Reopen by July 4

‘They are left to defend themselves’: San Diego approves legal help for some detained immigrants 2 min read