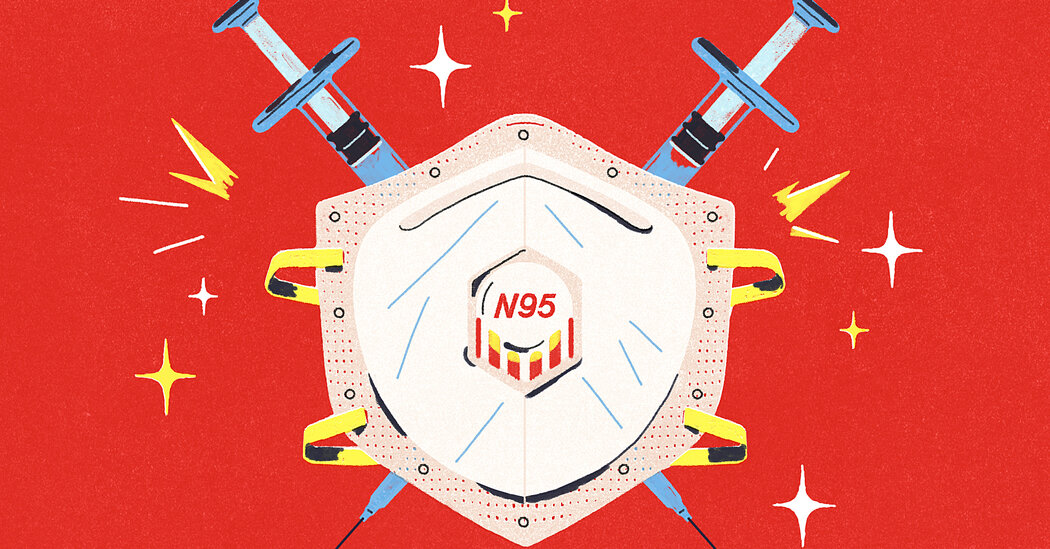 Although six-foot social distancing is not totally arbitrary, it’s based on limited evidence among airline passengers and may not apply at all, for example, to the unmasked cyclists shouting to one another as they ride past me or to the heavy-breathing runners I pass.

While the exact order of vaccine recipients may vary by state, most will likely put medical workers and residents of long-term care facilities first. If you want to understand how this decision is getting made, this article will help.

Life will return to normal only when society as a whole gains enough protection against the coronavirus. Once countries authorize a vaccine, they’ll only be able to vaccinate a few percent of their citizens at most in the first couple months. The unvaccinated majority will still remain vulnerable to getting infected. A growing number of coronavirus vaccines are showing robust protection against becoming sick. But it’s also possible for people to spread the virus without even knowing they’re infected because they experience only mild symptoms or none at all. Scientists don’t yet know if the vaccines also block the transmission of the coronavirus. So for the time being, even vaccinated people will need to wear masks, avoid indoor crowds, and so on. Once enough people get vaccinated, it will become very difficult for the coronavirus to find vulnerable people to infect. Depending on how quickly we as a society achieve that goal, life might start approaching something like normal by the fall 2021.

Yes, but not forever. The two vaccines that will potentially get authorized this month clearly protect people from getting sick with Covid-19. But the clinical trials that delivered these results were not designed to determine whether vaccinated people could still spread the coronavirus without developing symptoms. That remains a possibility. We know that people who are naturally infected by the coronavirus can spread it while they’re not experiencing any cough or other symptoms. Researchers will be intensely studying this question as the vaccines roll out. In the meantime, even vaccinated people will need to think of themselves as possible spreaders.

The Pfizer and BioNTech vaccine is delivered as a shot in the arm, like other typical vaccines. The injection won’t be any different from ones you’ve gotten before. Tens of thousands of people have already received the vaccines, and none of them have reported any serious health problems. But some of them have felt short-lived discomfort, including aches and flu-like symptoms that typically last a day. It’s possible that people may need to plan to take a day off work or school after the second shot. While these experiences aren’t pleasant, they are a good sign: they are the result of your own immune system encountering the vaccine and mounting a potent response that will provide long-lasting immunity.

No. The vaccines from Moderna and Pfizer use a genetic molecule to prime the immune system. That molecule, known as mRNA, is eventually destroyed by the body. The mRNA is packaged in an oily bubble that can fuse to a cell, allowing the molecule to slip in. The cell uses the mRNA to make proteins from the coronavirus, which can stimulate the immune system. At any moment, each of our cells may contain hundreds of thousands of mRNA molecules, which they produce in order to make proteins of their own. Once those proteins are made, our cells then shred the mRNA with special enzymes. The mRNA molecules our cells make can only survive a matter of minutes. The mRNA in vaccines is engineered to withstand the cell’s enzymes a bit longer, so that the cells can make extra virus proteins and prompt a stronger immune response. But the mRNA can only last for a few days at most before they are destroyed.

I’ve also heard a few people say, “I already got the vaccine, so I don’t need a mask.” This may be the most dangerous excuse of all. First, although the vaccines are very good, they’re not perfect, and chances are these vaccine recipients haven’t been checked for strong antibodies to the virus. Second, we don’t yet know if the vaccines, while highly effective in preventing sickness and death, will also prevent asymptomatic infection that can spread the virus to others.

As Jeremy Howard, a data scientist at the University of San Francisco, said of mask refusers: “How would you feel if you made your best friend sick, or killed your friend’s mother?”

Last February, after the World Health Organization, with no supporting data, advised against wearing a mask unless you were already sick, Mr. Howard amassed an international team of 19 scientists to review the evidence for mask-wearing, expecting to find “that masks were a waste of time,” he said in an interview. Instead, he said, the team found that “the data on the benefit of masks is really compelling.” The results of their exhaustive study were published recently in PNAS, the peer-reviewed Proceedings of the National Academy of Sciences.

Mr. Howard said that preliminary reports of their findings resulted “in all sorts of abuse, including death threats” from mask resisters. But that has not kept him from repeating that “wearing any kind of mask will greatly help to keep you from accidentally infecting others, which is important for the community and the economy. About half of coronavirus infections are spread by people who don’t know they’re sick, and the new variant is much more transmissible.”

A Chinese study found that the viral load in the upper respiratory tracts of infected people without symptoms can be just as high as those with symptoms, and simply talking and breathing can spread virus-laden droplets and aerosols. And because the virus resides in high amounts in the nose and throat, sneezing can spew an infectious cloud 10 or more times further than coughing.

Which brings me to the question of whether the face coverings most people use are sufficiently protective. I now know that the bandannas, exam masks and the slim neoprene masks I’ve been using for the last 11 months are better than nothing but not very good. They provide too many routes for virus-carrying particles to reach an unsuspecting nose or mouth.

Joshua 14 hours ago
U.S. Booster Policy Is in Flux as Studies Add to Dissent 10 min read